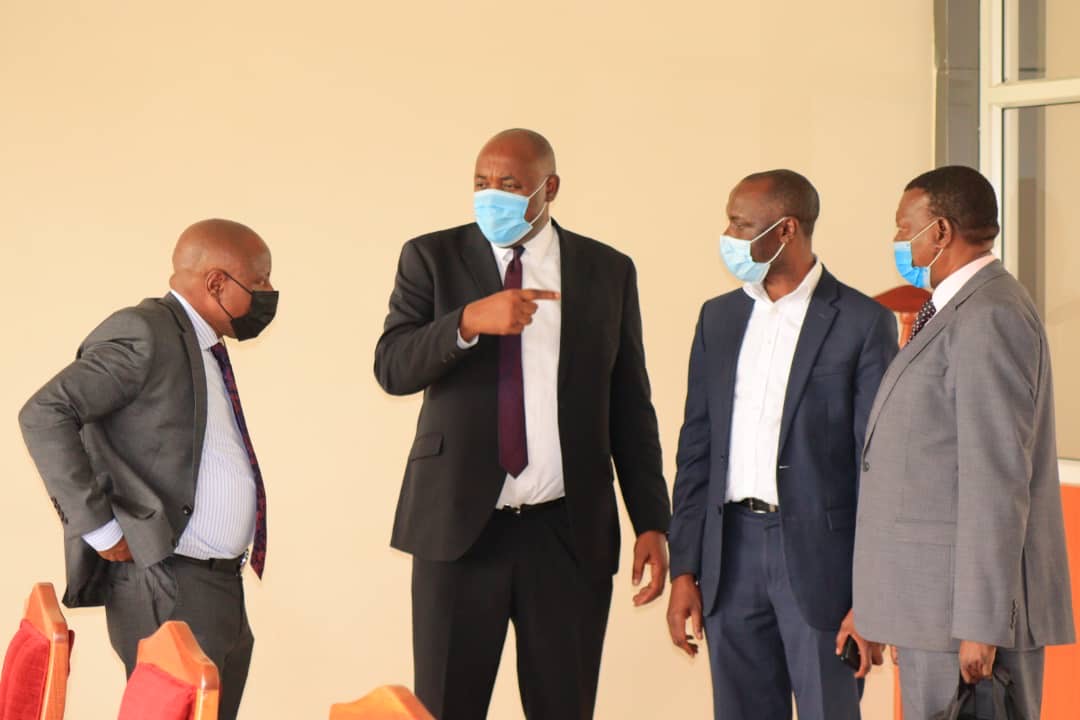 The four officials at the helm of the Ministry of ICT and National Guidance met with Ambassador Zaake Kibedi who represents Uganda in the United Arab Emirates (UAE). The meeting took place at the Innovation Hub at Uganda Institute of Information and Communication Technology (UICT) in Nakawa which will also be housing the country’s key Business Processes Outsourcing (BPO) infrastructure.
“We have taken it upon ourselves to create a space for the young and old to create solutions to our day-to-day problems through the knowledge they have, it brings hope that the young people are utilizing it effectively,” said Hon. Dr. Baryomunsi Chris, Minister of ICT and National Guidance who led the delegation.
The ICT Ministry delegation comprised of the State Ministers Hon. Joyce Ssebugwawo (ICT) and Hon. Godfrey Kabbyanga (National Guidance). The Permanent Secretary (PS), Dr. Aminah Zawedde was also in attendance and shared key points on areas H.E. Zaake must leverage to efficiently market Uganda among Dubai-based investors as the ultimate BPO and Innovations destination.
The team kicked off with a guided tour of the BPO/Innovations Hub followed by a press briefing and then an enclosed meeting with the BPO and Innovation Council. As part of the tour, different innovators were able to showcase their work to the ambassador through proof of concept. “One of the problems we face as a country today is the unemployment of young people due to the steadfast growing population, the government is now investing in young people deliberately to educate them, skill them, and build their capacity for job creation.” Commented Hon. Dr. Baryomunsi.
During the press briefing, Dr. Zawedde said that Makerere University alone channels out 3000 15,000 young people a year who graduate with professional skills, and yet the country has a limited white-collar job shelf thus the young people going overseas to do jobs they are overqualified for. She continued and said, “Government wants to create an ecosystem between academia, the people, startups, and more to increase investment. Ambassador, we await the big role you are going to play in marketing and branding Uganda to UAE as the ultimate BPO Destination.”
The PS then encouraged the people to support the youth to make innovations and further said, “we want to use the locally available resources to explore the opportunities all over the world… Let us deepen technology in Uganda so that we have innovation hubs in the countryside, regions, and districts. These will be strengthened by the various educational institutions that already exist in these places. “She concluded.

Hon. Kabbyanga concluded the Ministry’s submission by saying, “When we create systems for the country to use, they become affordable and eventually reliable. This helps us reduce how many systems we import and increases those we export thus improving revenue. A system starts with one or two people, as it grows, it attracts more people to work on it and also use it thus export but also job creation since the people purchasing the system will need people to work on the system and sustainably operate it.”
H.E. Zaake Kibedi expressed his gratitude towards the Ministry for creating activities and initiatives such as BPO for the development of young people. “If we continue to push BPO forward, we can quickly afford vision 2040; to become a middle-income country.” He emphasized. The Ambassador shared a story of Jaakko Iisalo, a Finnish video game designer, developer, and the Senior Game Designer of Angry Birds, who became a billionaire overnight through creating a game, that would later have more versions, buy-in, employ more people, and be played on different platforms around the globe. “The pandemic has created a new normal where people work from home so the BPO has room to thrive. “He added.
H.E Kibedi shared that time zone differences between UAE and Uganda create a work gap for Ugandans to fill while the UAE populations rest at night and vice versa thus increasing revenue, foreign exchange, and job opportunities.
Dr. Kiconco Rebecca, vice-chairperson of the BPO and Innovation Council presented the structure, plans, strategies, competitive advantages, and expectations of BPO in Uganda for efficient collaboration with UAE.
During the meeting with the ICT Leadership, BPO, and Innovation Council, the Ambassador applauded Uganda’s participation in the Dubai Expo which has so far opened doors for UAE investment in Uganda’s industries of agro-processing, energy, tea processing, to mention but a few. He advocated for high and quality participation during Kampala Innovation Week at the Dubai Expo come March 2021. “A good job done in March will increase investment overflow into Uganda. We hope to also invest in ICT to improve telecoms, artificial intelligence, and digital transformation. “He concluded.
Hon. Ssebugwawo said she is worried about the youth that is not employed and saddened by some jobs young educated people are doing abroad. “…but now that BPO will create jobs here (Uganda) from UAE, I am grateful. She stated.
“Our drive and passion to create jobs do not affect just the Ministry but all of us. We have brothers and sisters who a lot of money has been invested in their education and are unemployed. We hope for BPO to bridge this gap.” Dr. Zawedde said in her closing remarks. “We look forward to engaging with you as we prepare for the Innovation Week Month during the Dubai Expo in March, 2022. “She concluded right before the meeting was adjourned.

WOMEN’S DAY: HOW THE RURAL WOMAN IS BEING TRANSFORMED THROUGH ICT